[By Mike Thompson, Drums of Thunder]

I enjoy reading about peoples rise to stardom, but only to a point.  The stories are pretty similar.  They’re cruising along working hard and then they meet that one person and boom, they’re off to the races.  And it kind of irritates me.  It’s quite a realization when you discover that talent will really only get you so far.

That was my experience with The Big Nasty.  That was the band that should have “made it”.

Like most bands, The Big Nasty evolved over time and had different members that came and went.  It started in Rhode Island, when I was a high school freshman and Joey a sophomore, that the first jam sessions began.  We played for a couple years in various forms then kinda took a break from it for a while.  Then towards the end of my senior year, Joey (vocals and guitar) and I started playing together again.  Freshman year of college I met Pat (bass and bell bottoms), at Berklee, and he got pulled into the mix.  The three of us played together for a bit and we’d gig out every once in a while. Our tunes were a mix of Zeppelin, Allman Bros & Aerosmith.  Southern blues rock kind of stuff.  The band wasn’t even called “The Big Nasty” yet.  I think at some point we were called “August West” and maybe another weirdo name. I don’t really remember.

Within a year or two, Joey met keyboardist Kevin (aka Dirtbag) where they were both going to school at University of Rhode Island and pulled him in.  Joey had also been jamming with Phil (bass) back at home and at some point Phil replaced Pat.  And that group, Joey, Phil, Dirtbag and me – that became the core of The Big Nasty.

That was a great time because it was constantly developing and we had a solid future in front of us.

We decided to leave Rhode Island as a band to make it to the next level.  We considered, LA, New York, and Chicago, but finally decided on Austin, TX.   We liked the idea of warm weather, it’s centralized location and how conducive it was to the style of music we were playing.

We planned it for about 6 months or so before we made the move in 2002.  We did a scouting trip ahead of time and rented a 7 bedroom house on 18 acres of land outside of the main part of Austin where we would all live together.  It became nicknamed The Nasty Ranch.  We could make as much noise as we wanted to because no one could hear us.  The living room was our rehearsal space.  The parties were epic. 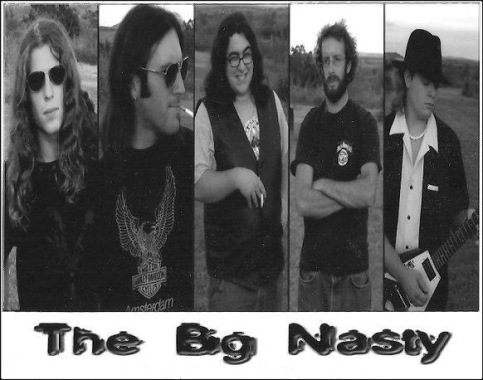 The first 2 years in Austin were fantastic.  We were all full of piss and vinegar.  All 23 and 24 years old.  We were meeting new people and new bands.  Our live show was sweaty, loud, sexy, raucous, and energetic.  Raw, pure talent.  You couldn’t stop us.  We all got easy jobs that let us focus on the music. We worked at print shops, and grocery stores.  I worked at a synthetics testing lab at some point.  All stuff we didn’t have to take home with us.

Before social media, I feel like there was a lot more word of mouth and people would hear about it and just show up.  So your live show was the only thing.  And there were A&R people that could show up and “discover” you.  But this was right when MySpace was becoming a thing and people were depending more on the internet for everything.  The music industry was changing along with it, and we weren’t.  We wanted so badly to embody everything of the 70’s that we sort of forgot that it was the 2000’s and shit doesn’t work like that anymore.  We thought our live show energy was enough to push us to the next level but obviously not.

Business-wise, pretty much everything was done by Joey.  He did the booking and the management. And I think he just really got burned out.  He was really handling everything alone.  In hindsight, we definitely could have helped him with a lot of things.  But we didn’t because we were young and dumb and partying all the time, and so we pretty much left everything up to Joey to do, which wasn’t fair or smart.  He’s only one person.

Our full-length album, Whiskey Drunk, was released in 2004 on Viewpoint Records.  They put up the cost for recording, which was awesome.  It was an amazing studio.  They were hoping to recoup the cost through record sales but that didn’t happen.  The distribution and marketing were up to us, and we didn’t do any.  We just had it made and sold it at shows.  We didn’t do a press release or really get it out into the world properly.  We’d get some good press once in a while, but it was never consistent.  And we didn’t try to drive it.

That was the same year we left The Nasty Ranch and we all moved to a house on Choctaw Trail to be closer to town.   And then the progress stopped.  It just kinda stayed there and didn’t go anywhere, even though we recorded more stuff.  It was just the same old shows, same old shit.  Same venues, no touring, and it got tiring.  And discouraging.

Sometimes I think being stuck in the same stagnant place for so long is what drove us to drink and drug so hard. Out of boredom and frustration.  It was very hard to stay motivated because we didn’t know what we were doing, or what we were doing wrong.  When you’re just trying to get going in the music industry, there’s no one to tell you what to do.   I mean, we were working our asses off in terms of recording and performing at shows.  But we weren’t on advertising or marketing ourselves the right way and we didn’t know it.

All together we ended up having three lead guitar players.  Daly was first, then Josh, then Grant.  We did gain some momentum in Austin by the time Grant joined in 2005-ish. We got a song on a local radio station in Austin and we had some pretty decent sized shows.  We did some traveling around Texas, but we never toured as much as we wanted to.  We couldn’t get our heads pulled out of our asses long enough to get anything done.

In the end, it just faded away.  Phil went back to RI, and that was basically the end of the band.  Joey and I left for Las Vegas, Dirt left for Philly.  Josh went to Kansas.  Daly and Grant are the only two that stayed in Austin.

All said and done, it was a great learning experience but it was also a huge bummer because that was supposed to be the band that “did something big.”  I don’t regret any of it.  We made some amazing music for sure.  But, in this business talent simply isn’t enough.  You do need PR and advertising and marketing and connections.  As times and technology change you have to change with them.  You have to evolve.  You can’t leave all the work to one person.  As a band, you need to figure out who’s good at what and share in an equal workload. The going will most certainly get tough but if you have each other’s backs and work equally hard toward your shared vision, success will come in one form or another.  Just keep an open mind when you realize the times, they are a changin’… 😉